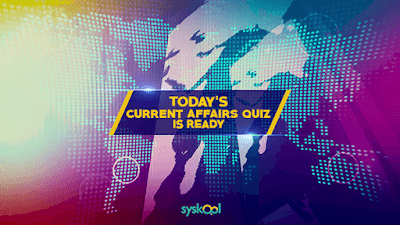 What was the theme of the International Day of Yoga celebrated this year on 21st?


Mauritania held the first ever election since its independence from France sixty years ago. In which part of Africa country is located?


Which of the following has recently received GI tag?


According to a notification by Nepal Embassy, all Nepal citizen will require a visa to enter India through Pakistan, China, Hongkong, and _____ ?


Which of the following company has recently invested in cryptocurrency startup Libra?


India has recently implemented C-ATFM, what is it?


Which of the following government has banned tree-felling because of increasing pollution and ongoing heat wave?


Government has recently announced that India's forest cover has increased by 1 per cent in last one year period. What percentage of India's geographical area constitutes of green cover?